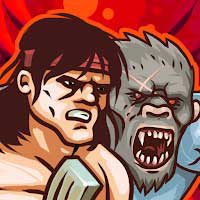 Hero, warrior, the world needs you!
Earth is threatened by a terrifying paranormal terror. The long dead are coming back to life, machines are turning against humans, and mysterious mutations are consuming all living things. Join our secret organization and fight evil. Help us avert panic and the ensuing apocalypse! Time is running out. Join us!
Colonel Trauman, signed in his own hand
Paranormal Terror Special Forces (P.T.S.F.)

In a simple but very effective way, you control two heroes who cover for each other and help each other with their weapons, experience and skills. Each hero can be upgraded and equipped with buffs in each mission to multiply their strength and abilities.

You can tactically deploy your heroes like in Tower Defense games and mow down hordes of enemies. But sometimes you have to use your wits to outsmart your enemies, because the battlefield is full of traps and surprises. Each hero also has a special active and passive ability. These abilities can turn around a nearly lost battle. It’s up to you how effectively you can use them.

Each hero has their own favourite weapon that can be upgraded. But that’s not all. Each hero can unlock a unique and more powerful weapon and upgrade it further.
Many values can be researched and upgraded for weapons. For example, dispersion, damage dealt, efficiency curve and much more.

You will fight intensely in many places around the world. However, you can choose whether you have the time and inclination to complete easy, normal or hard missions. Depending on the difficulty, you will be rewarded with medals for winning the mission, which will guarantee an increase in your organization’s prestige. The procedural generation of missions in turn guarantees an infinite number of battlefields.

The organization’s secret base contains everything needed to wage a secret battle against paranormal terror. It is important to keep the battle secret to avoid global panic and a much faster destruction of the world. At the base you can assemble your team, investigate unknown entities, plan missions and much more. But most importantly, you can track your progress through the game and check the prestige you’ve earned. This is because prestige will unlock a lot of additional content and bonuses in the game.

In the missions await you diverse enemies. Zombies, space invaders, mutated creatures as well as fighting machines and robots – these all threaten our world. But be careful! Epic bosses are waiting for the opportunity to thwart your plans. Nerve-jangling boss fights await. Defeat them for rare resources and bonuses. Research them and use the results of your research to fight them.

Disarmed enemies are transported to the base and subjected to research.
The goal of research is to fight the enemy more effectively and gain bonuses and resources from defeated enemies. Research takes time, but can also be accelerated. You can gain valuable information and an advantage for your next fight in no time.

Once hostile entities are properly researched, their trophies can be sold off. This is another source of considerable revenue for our organization. At the same time, exploring enemies unlocks achievements. But there are many more achievements waiting to be unlocked.

The threat of the apocalypse is now awakening! Join us while there’s still time. News of more locations, enemies and heroes is leaking out! It’s up to you how the world deals with the coming threat!

Avert the apocalypse, fight back! 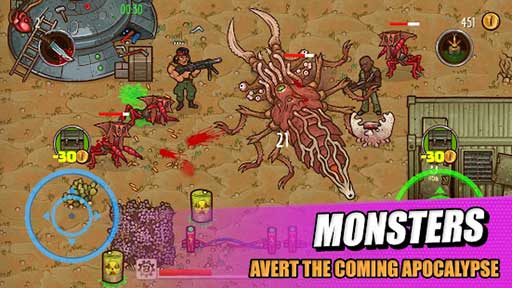