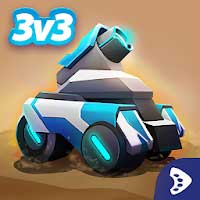 Join up with friends, plan your tactics and get ready for an intense real-time PvP battle! Unlock more than 20 fast-paced tanks of exclusive skills, own the best arsenal of weapons and put your strategy into action in 4 different multiplayer game modes:

– 3v3 Galaxy Football: capture the crystal ball from the center of the map, holding and “shooting” it to opposing team’s goal while fighting with them. A game of true football competitive style!

– 3v3 Team Death-match: Gain scores for your team by eliminating opponents, fight to absorb the ultimate power of the galaxy stone which appears at last 1 minute of the battle. The team with most scores at the end of the match wins!

– 1v4 Solo Death-match: 5 players battle in a round arena on Galaxy. Upgrade your tank’s damage and HP by 10% in the middle of the fight by owning the galaxy stone or stealing it from others. The player with most kills wins.

FEATURES:
– More than 7 stunning arenas on Galaxy for all players regardless of level
– Be creative as much as you want with your tactics: more than 20 tanks, each with signature attack and unique skill, together with 15 cool weapons (and more to come).
– Battle solo with world-wide players or play with friends
– Upgrade your tanks and weapons to max levels
– Communicate and team up with other tank heroes with in-game chat functionality
– A cross-platform game: play it on your phone or PC
– Free to win: equal chance to win and equal access to all in-game elements for everyone.
– Constant update on game content every month
– Daily and weekly champion system where you compete with only other 20 people for juicy rewards

Collect cards to upgrade your favorite tanks and skills. Compete for higher ranking in your country and world leaderboards. Play it now and be the star of all galaxy battles!

PERMISSION NEED
– Since you can share your victory in the game, we need your external storage permission as below, please accept:
• READ_EXTERNAL_STORAGE
• WRITE_EXTERNAL_STORAGE 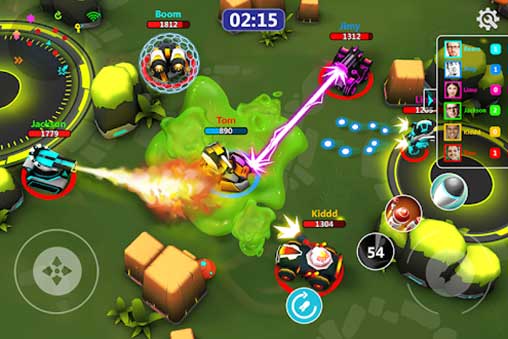