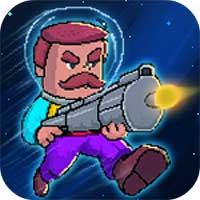 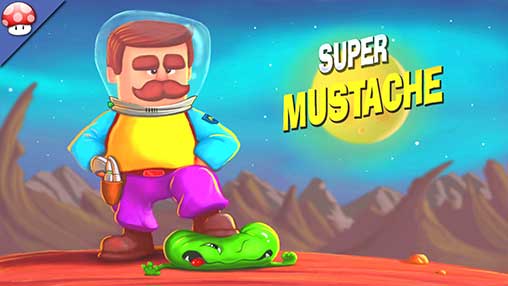 Welcome to another episode of Super Mustache adventures! We´re on Year 2040; the technology has reached unimaginable levels, and the space agency has been constructing a smart robot named Gladius, which has the most advanced artificial intelligence on it. Gladius is sent to explore Uranus Moons, but he decides that the Planet Uranus could be a great place to begin a new regime named Urantia and declares it his Kingdom. The habitant creatures of the planet are not happy and raise an army to assure that nothing from Earth can enter Uranus again. The army of creatures cannot defeat Gladius by their own; it seems that our hero Captain Super Mustache is the only person who can solve this! He sets out to end Gladius reign and try to convince the Uranus habitants to allow him to enter the planet. Enjoy this magnificently unique action platformer game that includes the juice of pixel art 8-bit style platformer. Now brought to you as a downloadable App, Super Mustache is an absolute must-play for any fans of old-school 8 bit pixel art – 2D platform game. If you enjoyed those classic platformer 8 bit adventure games, then you’re going to love this. Forget to connect or search for your old consoles, you will be able to revive the nostalgic childhood memories on your Android device!

** Jump Into The Deep Space Action! Play With The Most Fearless Adventurer, Be The Hero, and Join The Quest To Save The dark Planet Now!
Our old retro style addicting game will be now one of your top favorite free adventure games. As we want to keep the vintage style platformer, you don´t need an internet connection to play. Lovingly designed, we conjure up the spirit of old school adventure games giving an epic twist to the story so you can feel you´re still enjoying the most famous brothers saga on new adventures, with new enemies and new characters in this platform arcade game. The controls are also as simple as those retro videogames. Go through the 15 handcrafted platform adventure levels, pass the fantastic 3 worlds: Uranus cave,jungle and discover a whole new world of over 15 different enemies like robots, leprechaun, bugs,bats,heroes and flying creatures. Everything you need to spend unlimited hours of fun is in 8 bit retro platformer one app.

Clearing all levels of keen commander Super Mustache world will not be easy! Try the wild challenge & keep a sharp eye now! Be the hero and teach red robot Gladius a lesson!
Thanks to its fresh Graphics and remarkable platformer software that uses less memory of your device allows a fast interface; forget about crime solving games, criminal police games and all that adventure games that make you waste your phone´s battery, no more overwhelming your mobile and freezing screens. The Keen Captain will have to conquer. Unleash the power of Mr. Mustache, run, jump, escape and fight by jumping on your enemies head to smash them. Use all of your skills to avoid the traps that you will find on your path, as this requires a great precision and timing skill! You will count with 2 kinds of weapons to conquer all the boss battles! Prepare yourself to have some wall jump action, take the challenge and fight to defeat the robots army!
How many attempts will take you to finish the game? Play with your friends commander Super Mustache Space Adventure and find out who is the real champion legend now!
Super Mustache – 2d platform game Features: 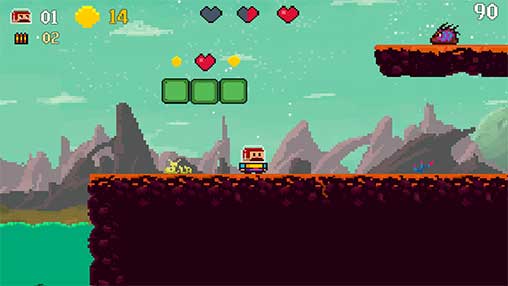