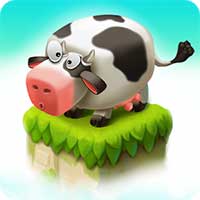 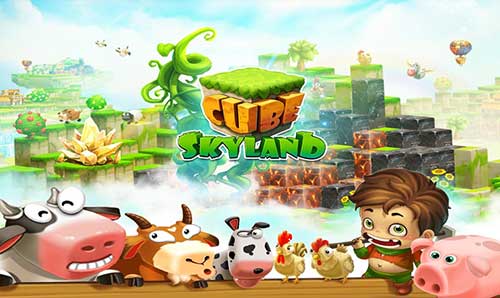 Imagine that each of you guys were put on an empty yet fertile land in the sky. How do you survive? This is a Massive Multiplayer Online Farming game where you can express your own excellence and talent to your friends and the whole world!

CUBE SKYLAND IS A STRANGE LAND WHERE YOU CAN:
MINE meteorites raining down from above with other villagers and friends.
CRAFT cubes from shards taken through excavation.
EXPAND your home into unique shapes with every single precious cubes.
SHAPE your home thanks to terrain heights.
EXPLORE the Skyland, the ancient holy lockup of Giants.
RESCUE cube animals from exotic lands, bring them to your home to get more profits.
TRADE with farmers around the global sky.

STORY:
The story begins in a faraway land in the sky – called the Skyland. Here the Giants were held captive for their wickedness, by those we no longer know. One day however, the Beanstalk grew too high, it ripped apart this holy lockup. The way down to our peaceful land once again unfolded. Rapidly the Giants raided down on earth, bringing along nothing but havoc. Lively forests and tranquil villages were all devastated under their ravage.

There was no other place to hide. Jack threw out the Magic Beans he had hidden to get everyone to safety. Guess what’s coming down there way? The Skyland, now ripped apart into millions of Skyshards. These seem to bring hope to these new poor inhabitants. And now, a new story begins!
MASSIVE MULTIPLAYER ONLINE FARMING:
Good-bye to being on your own for now! Live with 7 other girls/guys in one same village. Watch next-door players dealing with their farm in real-time. Together build your Skyland, by finding Meteorites and excavate them. Visit Red Riding Hood and other friends to help taking care of their land. If you all get along too well, your village may become the most impressive farm over the world.
CUSTOMIZATION:
Afraid of being shallow among others? Create your own terrain with cubes that float in the sky of Cube Skyland. Make words, shapes, and amazing things with hundreds types of Cubes. Express yourself with unlimited creativity.
PLANT:
Unlike other farm lands, harvesting requires a little skill. Do it fast and you will get more products. You even need to reshape your farm land so it suits your skill.
Love sugar cubes? Crops, Corns, Strawberries, Carrots, Tomatoes… are shaped into cubes that looks so funny and adorable.
Diamonds are so hard to find, but not here. Harvest with Lightning speed to get them!
ANIMAL:
No more stall or cage! Those animals are free to wander where they like. But beware! They might get lost!
Cube animals are even funnier! Just watch them move and suppress the urge to slap them from behind.
Don’t throw them in water if you are too busy for laughters.
QUEST:
Keep looking for hidden scrolls around your home, for they are quests to help you grow up fast.
Some quests are hard to reach, you need to connect a path using your cubes.
ACHIEVEMENT:
Although the Giants were gone, their legacy remains here. These are the four ancient Gods who are kind and good, once help keeping a peaceful world. But now they are wrecked. You need to restore them to unlock the Achievement system.
The Minor: The small god of soil and fertilization. But mountains of rock transform into dune instantly under his hoe.
The Deft: The famous metallurgist of the sky, who can turn rock and metal into the most delicate but powerful tools. He hates music.
The Green Giant: A simple and only Giant who is so lenient that he can even make friends with bunnies. Always hungry, that’s his secret!
The Mother Ator: All Giants are her children. She is a leader and and peace keeper. After her passing, the Giants become assaultive and sink in chaos.

Update:
+ Toxic Mine is now available in Shop since level 15. With it you can send labors to collect material even when offline, congrats!
+ New feature: successfully invite 1 friend grants you 1 additional Labor.
+ Improve the mechanic of Colossal Meteorite quests.
+ Reduce the stats of Crops and Animals (lessen the number).
+ Change the production time in Cube Factories as PM requested.
+ Fix some issues on JIRA and improve game performance as always. 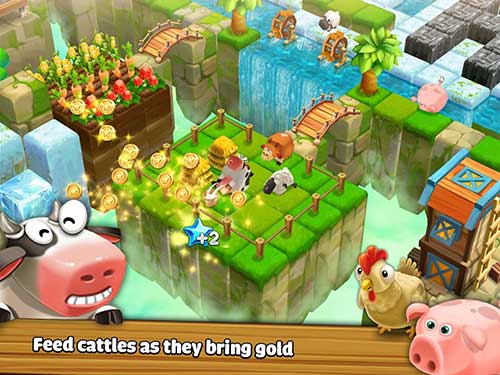