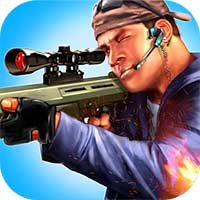 Sniper 3D Silent Assassin is the one of the best sniper games for Android on Google Play.
This is a 3d shooting game with amazing 3D graphic engine.
Join game and you can rpg into a elite Sniper who training from the harsh environments of American Army Academy. He’s a new soldier ( not a SWAT), but so fast he will grow up through each mission, each killer contract. He will become a legend or not is up to you!
Game has a deep storyline. You must face to so many enemy kinds. Character classes in game : Double Agent, Drug,Terrorist, Bomber man, Assassin, Mafia, Super Natural Man, Sniper, Bravo, Fighter, Kung Fu man, … All the kind of people in the life. Everyone also is able to become Crime. You have to use brain to analytic information and detect target soon. After that, strike them, perform headshot skill or fast and accurate technique. If you’re detected by target, they’ll be able counter and you’ll be suffered their fury. Some enemies is true hitman, he has good ability. Face them and you’ll sense be like a PVP match.
Game with large mission system make you feel satisfied. Gone with the call of judge. Pick gun and shoot all criminal gangs, destroy their squad. Join the battle, hunt criminal and let’s protect your city, your country. Become a true commando, a top sniper and ultimate shooter.

***HOW TO PLAY***
– Use coins to buy modern weapons in the shop.
– Upgrade your sniper rifles to reach mission recommended.
– Play wanted missions to earn money, and buy new gun or upgrade to play new primary missions.
– Play it anywhere Sniper 3D does not require you to be always online in order to have fun( a offline game). You can enjoy it in the subway, while flying on a (real) plane, in the car on the road, during services in a temple (or maybe even on toilet!). From time to time, it may be needed to download additional (free) content from internet.

***WEAPON SYSTEM***
– Sniper Rifle MVP SCOUT: Within the past few years the scout-rifle concept has become quite popular
– M14 US Rifle
– CHEYTAC M200 states that the system is capable of delivering sub-MOA accuracy at ranges of up to 2,500 yards (2,300 m), one of the longest ranges of all modern-day sniper rifles.
– SV98 – sport shooting rifle.
– BARRETT M82A1 – The largest damage weapon.
– WA2000 – use multiple bullet kinds.
– AWP – It has proved popular as a civilian, police, and military rifle
– ASW338
– CS5 lacks in range and velocity, it makes up for this by being the fastest firing bolt-action rifle, having the best mobility
– M40A5 a bolt-action sniper rifle used by the United States Marine Corps
– DRAGUNOV is a semi-automatic sniper/designated marksman rifle chambered in 7.62×54mmR and developed in the Soviet Union.
******NOTE *****
* This game is so amazing so you shouldn’t play game 2 or 3 hours / day to keep your health.
* In game , have a blood scenes and violence. You may want to keep away it from your kids , younger boys and girls. Even anger men shouldn’t also play it .
Let’s download game and start combat, join the battle with Sniper 3D Silent Assassin NOW! 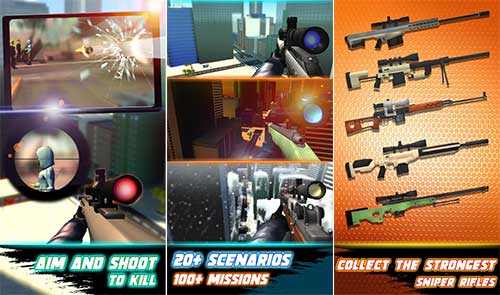 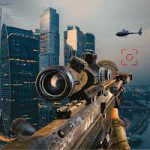 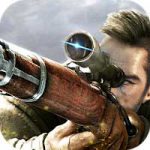 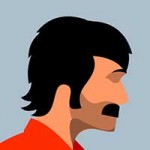 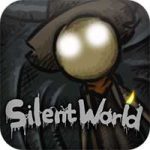 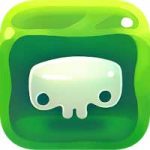