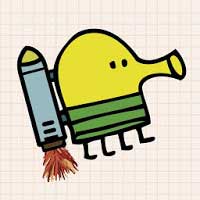 Doodle Jump is a platforming video game developed and published by Lima Sky, for Windows Phone, iOS, BlackBerry, Android, Java Mobile (J2ME), Nokia Symbian, and Xbox 360 for the Kinect platform. It was released worldwide for iOS on April 6, 2009, and was later released for Android and Blackberry on March 2, 2010, Symbian on May 1, 2010, and Windows Phone 7 on June 1, 2011 (Re-Released August 21, 2013 Windows Phone 8). It was released for the iPad on September 1, 2011. Since its release, the game has been generally well received. The game PapiJump by Sunflat Games inspired the gameplay of Doodle Jump, and characters featured in Doodle Jump were based on Elise Gravel’s illustrations. The game is currently available on nine platforms.

Doodle Jump was renowned for its selling rate by App Store standards, which counted 25,000 copies sold daily for 4 consecutive months (later overtaken by Angry Birds). As of December, 2011, the game sold 10 million copies over iTunes and Google Play and reached 15 million downloads across all platforms. The game has been developed into a video redemption game for play at video arcades. Croats Igor and Marko Pusenjak are authors of Doodle Jump.

One of the hottest mobile games of all time – now FREE and finally properly optimized for Android by the same team that created the original version!

See for yourself why Touch Arcade called Doodle Jump “possibly the best [mobile] game ever created” and Macworld called it “a perfect micro-game, insanely addictive, and deliciously replayable.”

How high can you jump?
Journey up a sheet of graph paper, perpetually jumping from one platform to the next, picking up jet packs, avoiding black holes, and blasting baddies with nose balls along the way. Laugh with delight as you blow past other players’ actual score markers scribbled in the margins. And be warned: this game is insanely addictive!

How to play:
Tilt to move left or right, tap the screen to shoot.

If you bought Doodle Jump in the past, make sure you have it installed on your device* when you install this new version! That will remove the ads. If you have already uninstalled/deleted the old paid Doodle Jump version, you can re-download it from “My Android Apps” -> “Other apps in my library” or by going directly to: http://bit.ly/oldpaid

* This will work for most devices, but unfortunately not the ones that the old paid version is not compatible with. We are trying to come up with a solution for those.

We stomped a few annoying pests