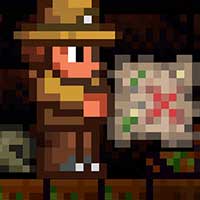 This is the TRIAL version of Terraria for tablet and phone.

“Terraria takes a different approach to a formula proven by Minecraft in perspective, combat, immersive-storytelling and – most importantly – moments of discovery.” Touch Arcade 5/5

“Terraria so damn engrossing. And it makes those comparisons to Minecraft seem a little half baked.” Pocket Gamer

“Terraria brings to the table a feel closer to RPGs and to Metroidvania-style adventures.” 148Apps

In Terraria, every world is unique — from the floating islands in the sky to the deepest level of The Underworld. Adventure to the ends of the earth, and battle villainous bosses along the way. Defeat the Wall of Flesh to unlock Hardmode! The world is your canvas and action-packed, sandbox adventures are just a pickaxe swing away!

MULTIPLAYER — Local WiFi games support up to 4 players! Play Terraria with friends across any other mobile devices! Adventure together or duel each other in player-vs-player combat!

Every pixel of Terraria has been crafted for the BEST possible mobile experience — including brand new touch controls and tutorials!

Visit us on the web at www.terraria.org