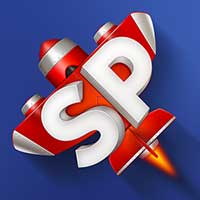 Note: This game requires at least 512MB of RAM and a 1GHz CPU.

Free direct download last version SimplePlanes from RexDl. Bring all of the imaginative aircraft you’ve had in your head to life.

Snap parts together to build your airplane’s body. Place engines to add thrust. Design the wings and then strap yourself into the pilot’s seat and see how it flies.

AIRPLANE DESIGNER
You have the tools you’ll need to bring almost any airplane to life. Use the flexible wing tool to change the shape of the wings and build almost anything.

Next-generation fighters, WW2 warbirds, civilian aircraft, and everything in between, some people have even made dragons, trains, and space stations.

DYNAMIC FLIGHT MODEL
Flight simulation at its finest. Every little change you make in the designer impacts how the airplane flies. Weight distribution, thrust, lift, and drag are all calculated before creating the final flight model.

REALTIME DAMAGE
Parts can break off in spectacular fashion while flying due to over-stress or by hitting something. The fun won’t stop there though. You can keep on flying even with a missing wing if you’ve got the skills.

SANDBOX MODE
Test your airplane with no restrictions. So, you’ve had a rough landing and the left engine was knocked off? After watching the engine fly off into the sunset you may decide to go ahead and slap the throttle to full…give it another go with only one engine.

CHALLENGES
Climb into the cockpit of one of your custom aircraft and see how it does in the challenges. The challenges will keep you entertained for hours. Land on aircraft carriers, dodge surface-to-air missiles, race through courses, and so much more.

AIRPLANE PAINTER
Use pre-built themes, or paint every part of your bird to make it just the way you want. Share your favorite stylings with all of your friends.

CROSS-PLATFORM AIRPLANE SHARING
There are no in-app purchases to get access to the airplanes people have shared; they are all available to download for free from http://www.SimplePlanes.com. You can use them even if they were made on another platform.

EDUCATIONAL
Tutorials will help players learn the basics of real airplane design and the considerations that need to be taken when airplanes are made.