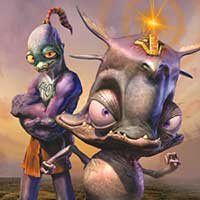 Oddworld: Munch’s Oddysee is a 2001 video game, originally released for the Xbox. It is the third game made by Oddworld Inhabitants. It is the second chapter of the Oddworld Quintology, following Abe’s Oddysee, and the third overall Oddworld game.

Originally announced as a title in development for Sony PlayStation 2, it was instead released exclusively as one of the launch titles for Xbox. While an “Oddboxx” containing the first four Oddworld games was originally intended for a holiday season 2009 release on Steam, the fourth game in the series was not released until December 20, 2010 on Steam, over two years after the first three.

Play as the Gabbit with odditude, Munch, and his side-kick, Abe, as they lead a revolution against the conniving, corporate clods of Oddworld. Munch has been captured, poked, probed and generally violated by the greedy corporate sickos, the Vickers, and now it’s time for him and Abe to turn the tables. Power up with Vendo Machines, use psychic powers to possess enemies and machines, arm yourself with oddball Vendo weapons, and rally Oddworld’s wacked-out inhabitants (via GameSpeak) to stick it to the Vickers and save the day. C’mon. The fate of Oddworld is in your hands.

Experience the classic game Munch’s Oddysee in high definition. Improved graphics and sound make for an even more thrilling ride! Play as the Munch the Gabbit as he hops and swims his way to bringing his species back from extinction.

Using special powers, cool power-ups, and other special abilities to deliver payback to the Vykkers, Abe and Munch reclaim the last gabbit eggs on Oddworld, which have been packaged in a can of gabbiar. May Odd help you!