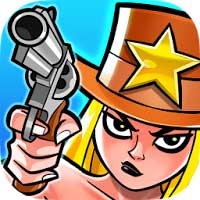 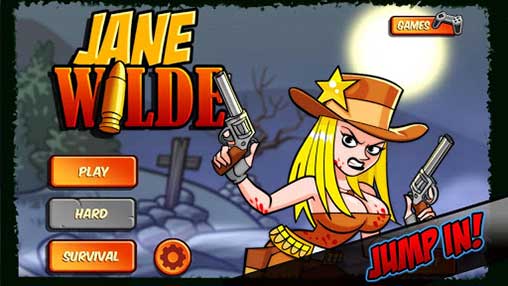 This is an all new cowboy side action scrolling shooter game where your mission is to stay alive while killing as many dark undead creatures as possible. You do all this as the Wild West’s first female sheriff hero ! She might be a blonde girl, but she has the biggest pistols in the West.

To aid in your quest you have upgradable weapons, including: revolvers, a shotgun, a gatling gun. Additionally, you have effective powerups to help you survive any sticky situations involving scary unnatural animals and monsters.

Take pleasure in bloody hunt and shooting, kicking skulls, bombing tons of creatures from nightmares. Sheriff Jane will have to investigate the mystery of supernatural evil monsters and their goals. She has an itchy trigger finger ready to shoot. Jane makes a battle look easy.
The walking menace of risen dead stand no chance against her pistols and her killer instinct. Guns are blazing, skulls are flying, blood is being spilled – the beautiful sheriff is creepy skeletons’ worst nightmare. Dangerous, Jane will make an apocalypse in the west! She is Immortal horde’s from hell new nemesis. War is on!
These creepy dangerous creatures from nightmare might be vampires and skeletons and not zombies but they sure are annoying and ready for a crazy fight. Jane is the last frontier and defense of free world against outlaw legion ready to kill. Demon bandits and their bosses have a deadly plan for human’s extinction.

Some great old hot pistols and shotguns in Jane’s arsenal will help this blonde to defend and prevent an attack of savage force ready to spread death, in order to dominate and slaughter humans. This dangerous blood adventure will bring out the animal in you.

– Now you can purchase ammo and weapons while offline.
– FREE NEW YEAR COSTUME! During the winter holidays you will be able to try out new costume for free! Just pick default Jane costume in the costume section! Ho Ho Ho! Merry New Jane Wilde! 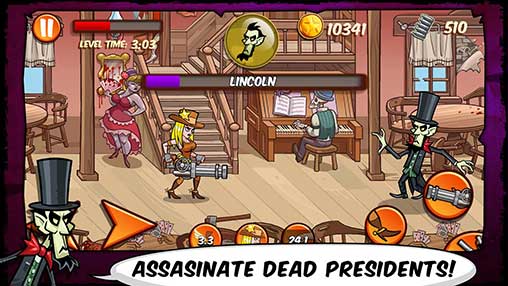