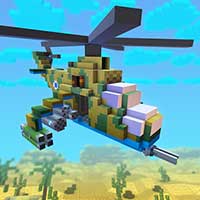 Take off with your rescue helicopter, be the hero chopper pilot, and save the life of the wounded soldiers in the battlefield. Fight against tanks and trucks firing their weapons at you and transport the friendly army back to their base.

In Dustoff Heli Rescue 2 you can:

Save hostages being held in Prisoner of War camps.
Combat in military attacks in the desert, forests, mines, swamps and fjords.
Build radio towers and bridges.
Protect the friendly truck and VIP convoy before the enemies can reach and demolish them!
Find and transport the stolen trucks and cargo and take them back to the HQ!
Fight against the extreme weather conditions and fly in dust storm, heavy rain and snow blizzard.
Upgrade your weaponry, install various gun, missile and rocket weapons to protect the friendly soldiers.

Added two new aircraft, the Ufocar and the Helocycle. They can be unlocked by collecting dogtags.
Minor bugfixes
Removed permission.