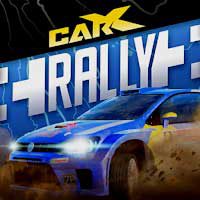 Real Rally Championships for the first time!
REALISTIC PHYSICS. How to drive – you decide. Drift or full adhesion?
RALLY CHAMPIONSHIPS. 35 tournaments for different sports cars. The challenge is waiting.
LARGE CAR PARK. Various cars from rally cars to muscle cars.
CAR IMPROVEMENTS. The parameters affect the behavior of the machine.

Prickly Pear
Physics is promising. The weight transfer and cars understeer& oversteer balance when accelerating and decelerating feels quite natural. The steering doesn’t correct itself on landing from big jumps, so you have to get it lined up properly. AIs are pretty quick. That uncompromising gameplay really adds to the immersion. Track generator means you don’t get much details on the tracks and it takes some time to start playing. You don’t get cockpit POV, manual gearbox, and personalised controls.

Riley Ross
This game is great! Amazing arcade game that you would probably play while sitting in a waiting room, it has decent graphics and physics. For a gaming company like CarX to release this game on mobile, it gives more kids and adults who may not have a pc to have the opportunity to play a somewhat realistic racing sim.