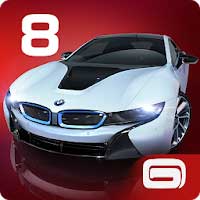 Asphalt 8: Airborne is a 2013 racing video game, developed and published by Gameloft as part of the Asphalt series. It was released on August 22, 2013 for iOS and Android, November 13 for Windows 8 and Windows Phone 8, and January 15, 2014 for BlackBerry 10

In Asphalt 8, you’ll race in some of the hottest, most high-performance dream machines ever created, from cars to bikes, as you take them on a global tour of speed. From the blazing Nevada Desert to the tight turns of Tokyo, you’ll find a world of challenge, excitement and arcade fun on your road to the top!

REAL LUXURY DREAM CARS & MOTORCYCLES!
• Over 220 high-performance cars and bikes for you to drive and push beyond their limits.
• Top licensed manufacturers and models, such as the Lamborghini Veneno, Bugatti 16.4 Grand Sport Vitesse, Ferrari LaFerrari, McLaren P1, Porsche 911 GT3 RS, Ducati Monster 1200 and more, including a selection of racing motorbikes!
• Newly recorded high-fidelity motor sounds for realistic audio immersion.
• Customize & upgrade your rides with over 2,300 decals to take down your opponents with style!

GET AIRBORNE WITH ASPHALT 8
• Hit the ramps and take the race beyond the limits of physics as you break free from gravity and into the sky with your car or bike!
• Perform barrel rolls and wild 360º jumps as you soar past your opponents.
• Maneuver through the air while pulling off insane stunts in your car or motorcycle to maximize your speed and find a fast route to the goal.

EXOTIC NEW LOCATIONS
• Over 40 high-speed tracks in 16 different settings, such as Venice, French Guiana, Iceland, the Nevada Desert & other exciting locations to ride your car or bike across!
• Race any track you want in original mode or its mirror variation to ensure a fresh challenge in Career mode that’s sure to keep you on your toes.
• Discover plenty of shortcuts hidden throughout every location. Mastering them is sure to raise your game to the top of the competition!

AN ENDLESS STREAM OF CONTENT FOR SPEED FREAKS!
• 9 seasons & over 400 events in Career mode, with plenty of challenges for even the most experienced car and motorcycle riders.
• Stunning visuals thanks to next-gen shaders, real-time geometry reflection & other amazing HD effects.
• Check out the Infected and Gate Drift modes for a fresh twist on racing.
• Win top prizes in the Limited-Time Cups, including early access to some of the latest cars in the game!
• A detailed damage system.

THE ULTIMATE MULTIPLAYER RACING EXPERIENCE!
• Gear up for simultaneous multiplayer action for up to 8 real players!
• Multiplayer Seasons & Leagues! Race your best against other players to score points and unlock prizes in limited-time Racing Seasons.
• Dare friends to asynchronous races as you chase your rivals’ ghost cars and bikes across the track.
• Compare scores on the new leaderboards with friends and rival riders around the world.
• Share your racing achievements and prove that you’re the ultimate speed machine.

MUSIC TO REV YOUR SOUL
• A heart-thumping mix of amazing music licensed for Asphalt 8 to drive your need for fast arcade racing.

CONTROL CUSTOMIZATION
• Rearrange your on-screen icons and controls however you like to customize and optimize your style of play.

So, are you ready for a real HD stunt-racing experience? Can you handle the Ferrari, Mercedes, or Audi of your dreams, among dozens of high-octane motorcycles? Do you have an insatiable need for groundbreaking speed? Well, consider this your green light to go and download Asphalt 8, fast!

– The 9th Anniversary is here:
Thank you for being with Asphalt 8 all this time! We’ve prepared lots of awesome content and rewards for you.
– Festive vibes in the new Season Pass:
A new batch of prizes, along with the Mitsubishi Lancer Evolution X Anniversary Edition, are waiting for you in the new Season Pass.
– More awesome cars:
Feel the power with the new Faraday Future FF ZERO1. Moreover, meet the brand-new Beltoise BT01!
– More self-expression:
Meet the new AIRBORNE MARK II outfit.